Want to get to the top of the mountain before everyone else and get there with plenty of extra zip and power? Then ride a Morgan. Want a horse that you can ride today and if you can’t ride again for a month or even longer, not want to have to retrain or re-break the horse? Get a Morgan. Want to have a horse that will show you affection as well as be your friend? You need to have a Morgan. We found that the Morgan Horse is the all-around family horse as well as western working horse for just about any project you want. We raised four boys with our Morgans and enjoy our horses for just about anything we do. We drive them, ride them, pack them, go to the mountains, go to parades and do anything we want. Morgans are versatile! They are more adaptable to any situation than any horse we could have ever gotten for our family.

Our first mare was called Shawnee Lass. She was 17 when we got her. She had many more colts and at 26 we chose not to re-breed her. She was the grand-dam of our stallion Pierre Noire. Shawnee was an unusual mother. She would have her colt up within a few minutes and walking. She kept that colt going from day to dark, seldom letting him/her rest. She was one of the best! 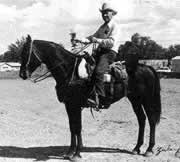 We bought Bombo from Ramul Dvarshkis when Bombo was 6 years old. He was our stallion for several years, siring both Morgan colts and cross bred colts. He was a “family horse” and was used for everything. We broke him to drive both single and double and used him to break other horses. He could be used by child or adult alike, was never hard to control and was one of the greatest horses we have owned. Interestingly, he seldom threw a filly. Almost all the colts were horse colts. The few fillies were special.

Cody’s Curly was a colt out of Shawnee and Bombo. At 9 months old, he was broke to drive and with a little cart the boys drove him all over our area. We put pony shoes on him and wore them out! Cody’s Curly was driven as a team with Bombo and the “team of stallions” was a favorite with those who saw them.

Our first mares were Shawnee Lass, Ramul’s Princess and Ramul’s Bay Comet. Ramul’s Princess died in August of 2003. What a grand lady she was. We cried when she died. Ramul’s Bay Comet is owned by a lady in Casper Wyoming. This mare has been greatly used for showing and training. We have purchased many more Morgans over the years and have good memories about all of those we have owned. 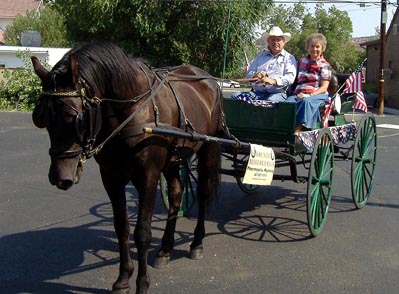 When we came back to Wyoming in 1994 we began looking for a new stallion. We left Bombo in California; he had become too old to breed. A black Morgan was advertised over in the Riverton/Lander area. Ramul went with me one day to look at this horse. We found a four year old black stallion, nearly 16 hands tall, owned by an outfitter. The stallion was S Bar B Pierre Noire. He had bought this stallion to breed to draft mares to get big dude horses for his hunting program. When we begin looking at his bloodline, he was a grandson on his dam side of the first mare we bought, Shawnee Lass. His sire was H-Saracen by the famous Cross Ranch stallion Chingadero. We made the deal and that was the beginning of a great adventure.

S Bar B Pierre Noire was the first colt sired by H-Saracen. H-Saracen was 14 when Pierre was born. We found out that Pierre was a smoky black. Few if anyone in the area around Thermopolis area had seen any “colorful” Morgans. We had purchased several of the Ramul Dvarishkis mares. The first mare we bred to “Pierre” was Ramuls Barby and when the foal was born it was a beautiful palomino colt. I called Ramul to come and see it. When he arrived, I walked with him to the corral, I had not told him what it was. When he looked in, he was surprised and said “…I never got anything like that!” That was just the beginning of Pierre throwing buckskins and palominos. The percentage of colored Morgans produced by Pierre was very high. Pierre died at 19 in August of 2009. He is greatly missed! 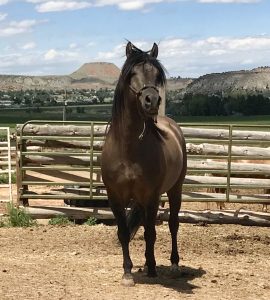 Our grullo stallion, Truwest Silver Suede, is a son of S-B Pierre Noire and Truwest Adobe Rose. He is a dun that also carries the cream gene. We are excited about what he is giving us in foals. His first year to be a breeding stallion was the year of 2011, and we have been getting smoky black, grulla, buckskin, creamello and Palomino. His foals have that same quiet disposition of their grandsire.

Suede meets the qualifications we have set up for our breeding stallions. Our first requirement is that the stallion have an awesome disposition. You can’t build a breeding program unless your main stallion has that special attitude. A quiet, friendly spirit with a willing heart is vital to our program. Pierre was such that prospective breeders could come and go right into his pen, even the family and he would stand and never get antsy or difficult to handle. Second, we look for good conformation and when that is satisfactory, we are blessed when we have “COLOR.”

We like driving. Morgans are easy and quick to break to a cart or drive double. There is nothing better than to be behind a team of Morgans!

We recently purchased a gaited Morgan stallion, MTN Top Black Chrome. He is already excelling in good offspring with good minds and a good gait. 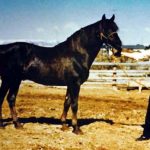 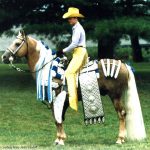 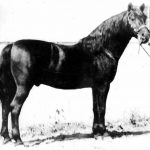 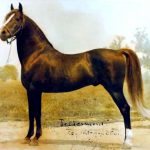 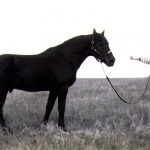 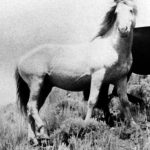